UK Institutional Blog Posts When to leave the party

When to leave the party 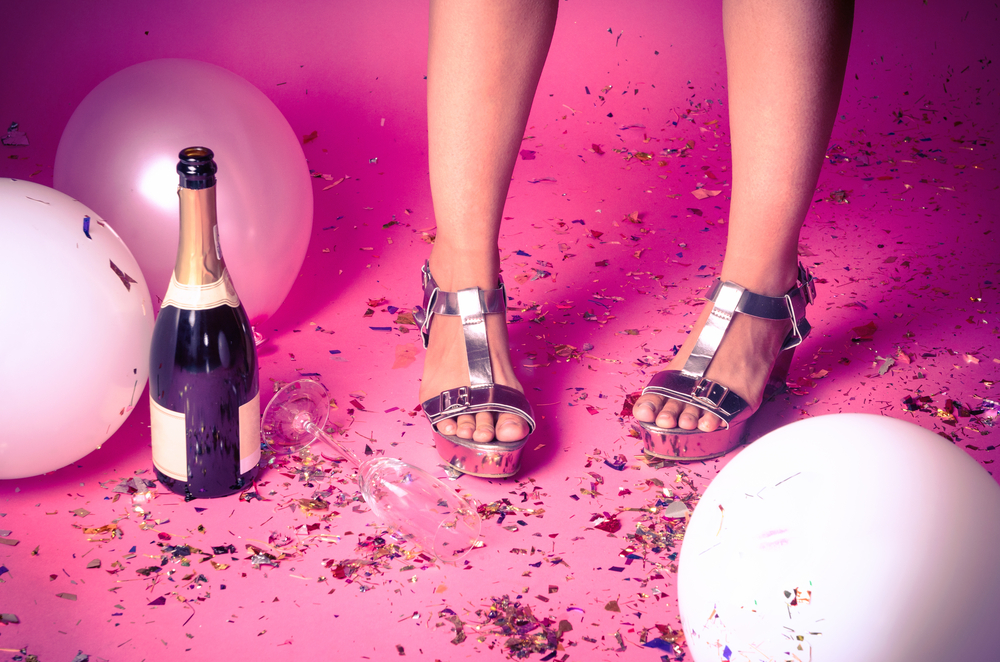 Calm before the storm?

We have heard a lot in recent weeks about the lack of volatility in markets. The chart below shows the current low level of both US equity and bond volatility, as measured by the VIX and MOVE indices. One assumption is that this should correct shortly and that we are likely to see an event which pushes volatility higher. 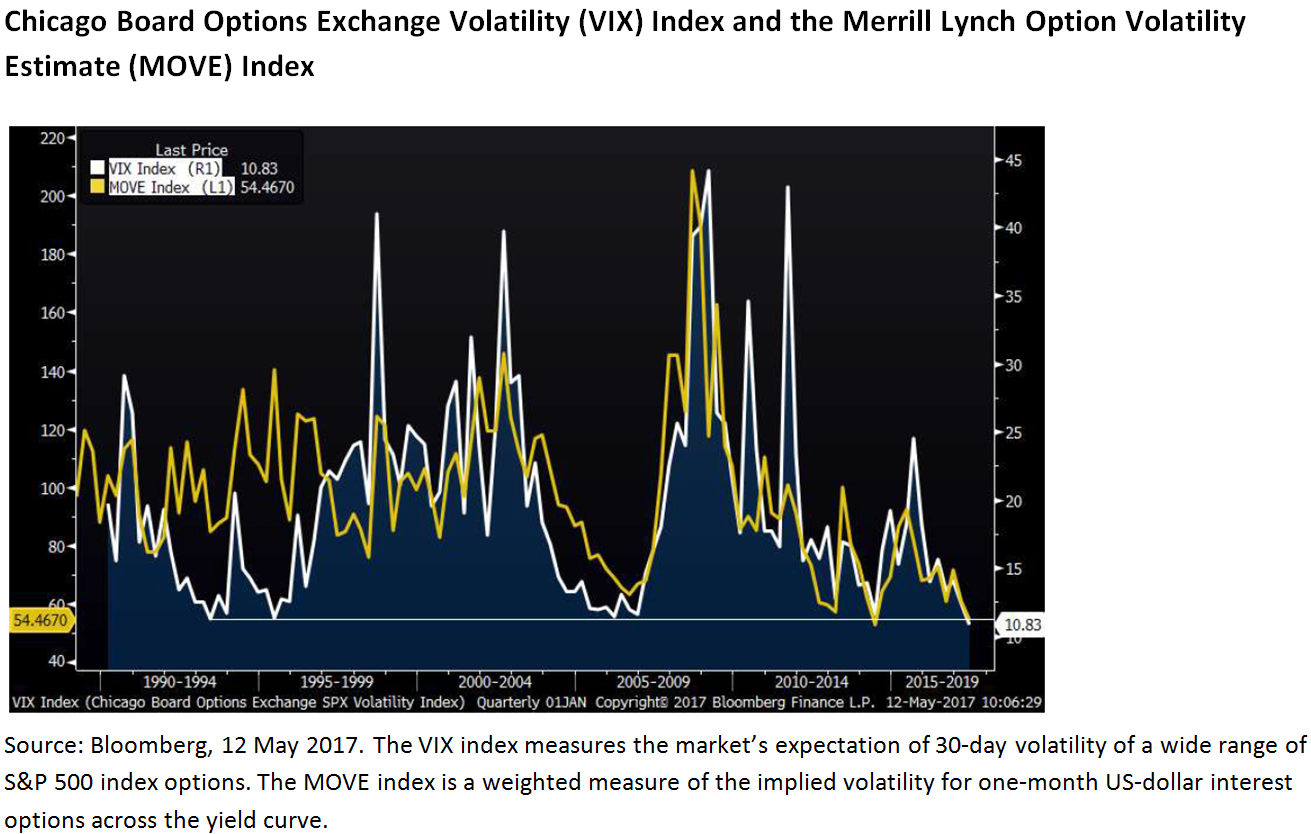 Given the uncertainty over European politics, geopolitics related to North Korea and the ever-changing US administration, many are questioning why volatility numbers are not higher already.

One obvious answer is that despite these concerns, the world economy continues to grow gradually without sparking inflation and the central banks are maintaining high levels of market support through large central-bank balance sheets and low interest rates.

This could change gradually. The Federal Reserve (Fed) continues to talk about raising rates, and a rate hike in June appears certain according to the markets. We expect more rate rises are likely to be priced in, and talk of reducing the Fed’s balance sheet is likely to grow. Meanwhile, the potential fallout from European political events has subsided (we have long held the view that the Italian election, when it comes, is the main concern), and we expect the focus to gradually shift to the European Central Bank tapering its bond purchases and talking about raising rates. The Bank of England has finished its quantitative-easing programme, which will leave the Bank of Japan as the only central bank that is pumping money into markets (not good for the yen).

A gradual shift away from central-bank support for markets may take a while to filter through to risk assets and raise volatility, especially if economic growth stays on track, but eventually markets should take notice.

Lessons from the past…

Ahead of these events, and before the monetary tightening starts to bite, we have looked at which markets do not adequately compensate the investor and compared a few key statistics with pre-credit crisis levels.

Overall, real and nominal yields are now much lower and spreads higher than in February 2007, but still modest.

We have also considered what happened to investment-grade and high-yield index returns from February 2007 through the financial crisis period. As you can see from the chart below, high yield (blue line) lost money over the next year (before the large drop), and investment grade (red line) made a bit over the next year, but much less than the starting yield (i.e. there were capital losses), and lost money thereafter. 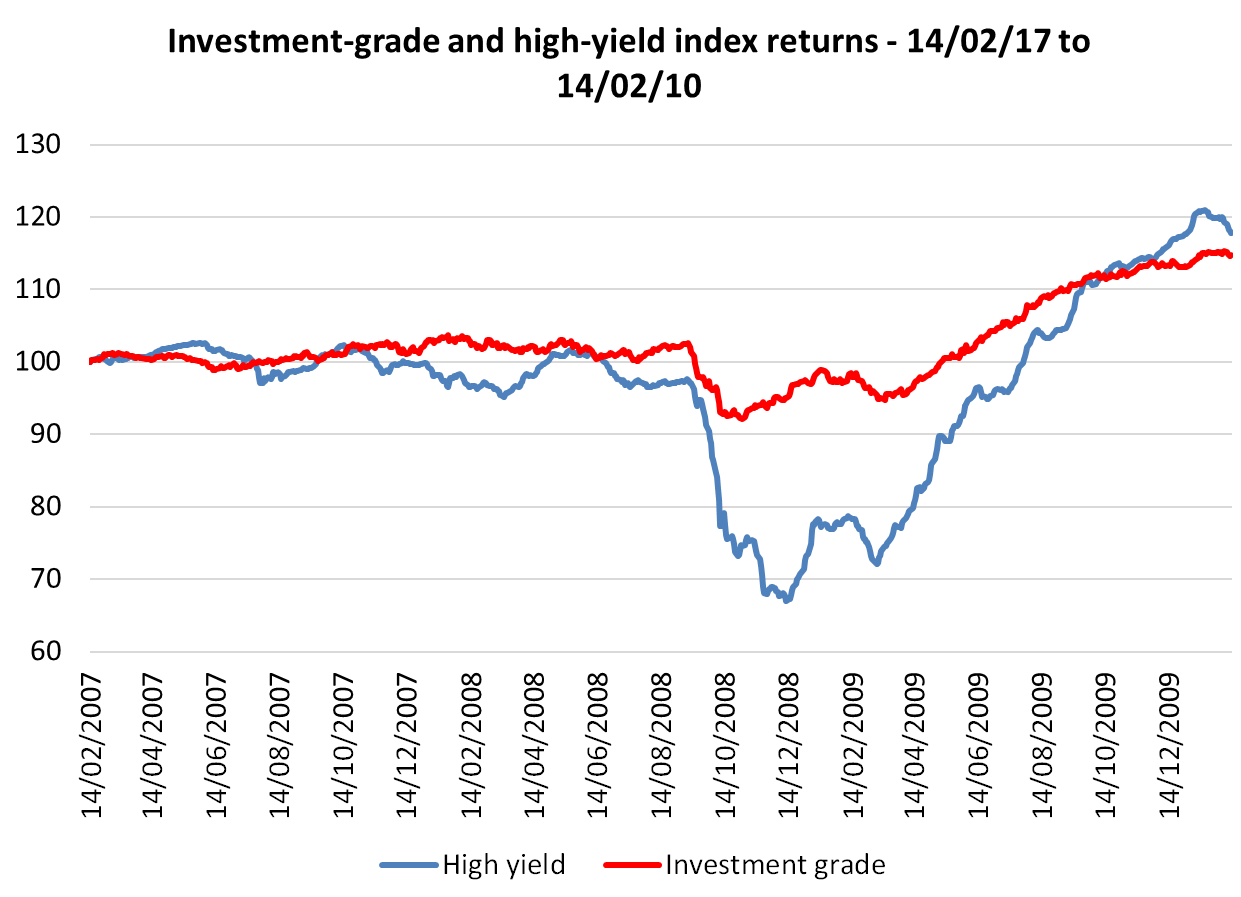 Our concern is, if a sell-off in the fixed-income markets occurs now (perhaps triggered by unexpected changes in rates/inflation, disorderly central-bank balance-sheet unwinding or a credit problem), the power of income to mitigate capital losses is much less. Added to this, the ability of government bonds to rally sharply is questionable (although we have learned yields can go negative).

Within our global dynamic strategies, exposure to high-yield bonds is already fairly conservative (low weight and short-dated), and we have also looked at the investment-grade positions and focused on reducing euro-denominated bonds (low-yielding and most vulnerable to the removal of central-bank support), guided by our global investment themes.

The net result is that the strategies’ cash and cash-equivalent holdings have risen – we now have 63% invested in securities with a maturity of less than three years. Timing the turn is never easy, but we would rather sell expensive credit assets when bid-side liquidity is good (as it is now) and the cost of being early is modest, rather than ‘dance near the door’ and hope we can squeeze through a narrower exit when other credit investors are also trying to leave the party.