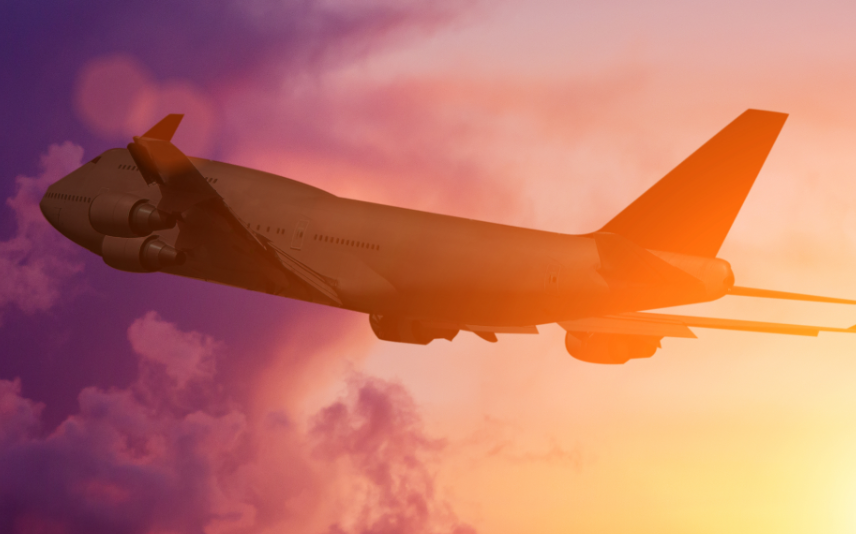 Having spent the last few years eating into the market share of many US airlines, the Middle Eastern airline market, dominated by the ‘big three’ of Etihad, Qatar Airways and Emirates, has had a tough time of late.

Amid accusations of alleged government subsidies helping to boost their margins, many rival airlines have voiced their concerns that the Middle Eastern flag carriers have been handed an unfair advantage over many of their US and global competitors.

However, year-on-year growth in international revenue passenger kilometres (RPKs) flown by Middle Eastern airlines has fallen dramatically over 2017, making it the only international market not to have grown, in annual terms, over the first eight months of this year. (See chart below).

Year-on year growth in non-stop scheduled seats (red) and RPKs (blue) for scheduled services and passenger traffic for Emirates, Qatar Airways and Etihad, between the Middle East and North America since 2013 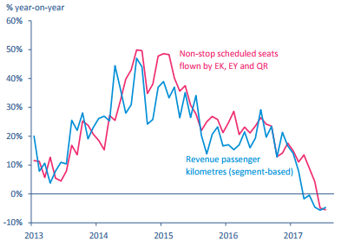 *International routes data up to August 2017, domestic market data up to September 2017 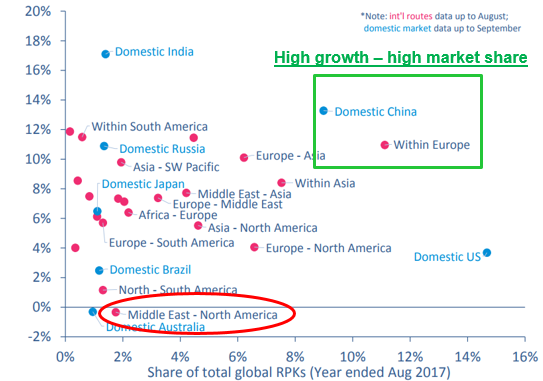 So what has caused the fall in growth for the Middle Eastern flag carriers, and what are the potential implications for the broader airline sector?

We believe there are several factors behind the trend, and behind the fall in the number of flights from the Middle East to North America specifically. First, there has been the US ban on personal electronic devices. Although this has since been lifted, it is likely to have deterred a number of business travellers in particular. Secondly, Donald Trump’s proposed travel ban to the US, which has affected a number of countries in the Middle East region, may also have had a negative impact on the number of flights booked from the region to the US. Thirdly, the growing hostility within much of the Middle East towards Qatar for its perceived pro-Iranian and pro-Shia stance, has put pressure on that nation’s flag carrier airline.

Separately, as part of its bid to plug into the lucrative short-haul ‘Within Europe’ sector, Etihad took stakes in budget airline Air Berlin and Italian flag carrier Alitalia in 2011 and 2014 respectively. Both ventures ended in failure, however, which has subsequently freed up capacity for the Within Europe airline network and increased the consolidation trend within the region.

Combined with the more recent collapse of UK charter airline Monarch, the Within Europe sector (second in size only to the domestic US market) has enjoyed accelerated growth, up 7.5% over the calendar year 2016, and a further 11.5% over the eight months to the end of August 2017.

Together, Monarch, Air Berlin and Alitalia accounted for 68 million passengers in the 2016 calendar year, or around 7% of the total European market. Since 2006, capacity in Europe has been rational and lagged demand, which has led to the load factor increasing from 77% to an industry high of 84% this year – ahead of Asia Pacific (79%), the Middle East (74%), and North America (81%).

Moreover, with Alitalia, Air Berlin and Monarch now out of the market, the major European budget airlines could be primary beneficiaries, and, over the next 18 months, airlines are guiding for reduced capacity and better pricing.

In terms of the Middle Eastern airlines, we believe their current tough predicament is a temporary one. They have significant amounts of new aircraft inventory to come on stream, and we would anticipate capacity to start coming back, and for them to soon start pricing themselves back into the market. The window of opportunity for major rivals to grasp the opportunity to grow their market share at their expense may be limited.