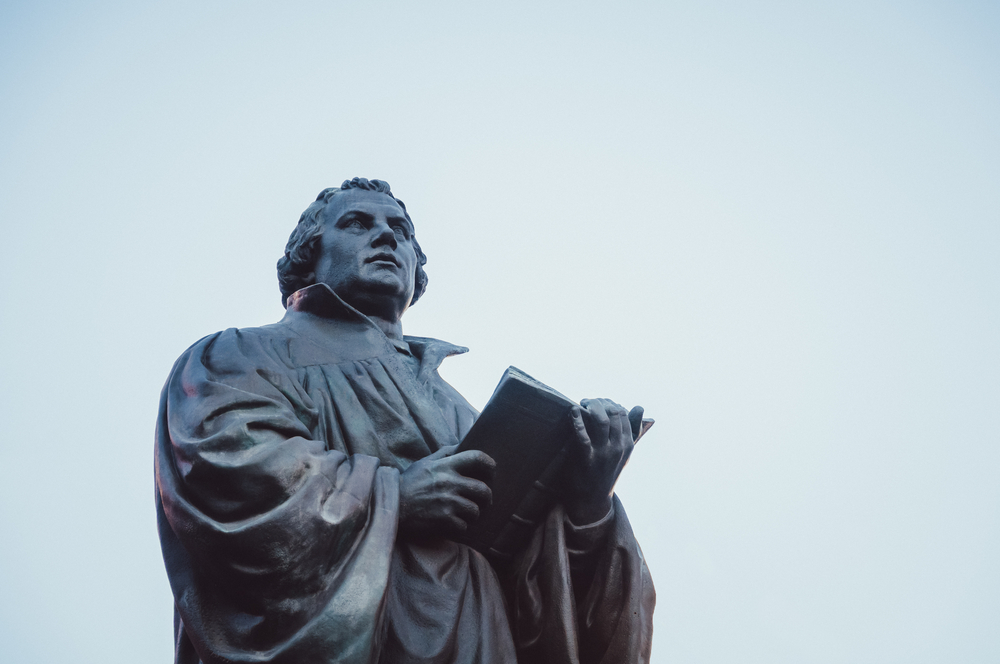 At the start of 2017, with a number of political risks on the horizon, we were fairly cautious on the outlook for Europe, and sceptical about the area’s ability to catch up with the US in terms of growth.

However, with the rise of the far right quashed for the time being, most notably following elections in France and the Netherlands, political uncertainty has lifted and Europe has defied expectations.

Eurozone GDP growth – how strong has it been? What is driving it?

Eurozone GDP growth, at 2.3% year on year, has now caught up with the US (see chart 1). While commentators often focus on the contribution of exports to this growth (representing around 0.5-0.7%),[1] chart 2 shows that a return to strength in private consumption and fixed capital formation[2] has also made a notable contribution to this recovery.

Although euro appreciation is likely to prove a slight headwind, we expect exports to continue to grow if the global growth backdrop (in our view a more influential factor) remains supportive. 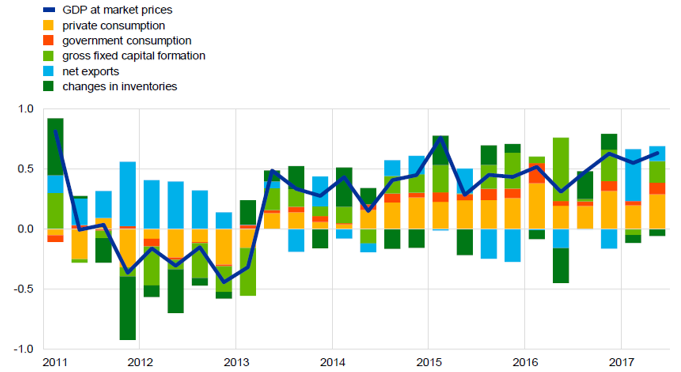 Source: Eurostat.
Notes: The latest observations are for the second quarter of 2017

Europe has been a standout performer since the start of the year – albeit starting from a low valuation standpoint – with the FTSE World Europe ex-UK index posting a return of 19.1% since the start of 2017 versus a return of 12.6% for the MSCI All-World.[3] If it can sustain this momentum, and with valuations still low in our opinion, we think the region should continue to post good relative performance compared with the rest of the world.

There are a number of factors which are vital to sustaining this, including strong global growth, continued accommodative policy by the European Central Bank (ECB) to keep debt costs down, and a lack of political or terrorism-related shocks. However, in this post, I’d like to explore the impact that reforms could have on European growth. To do this, I’ll use three countries as case studies – one which has successfully used reform to achieve growth (Germany), one which is still going through that process (Italy), and another which is embarking on a new set of reforms (France).

Reforms – how effective are they?

Five years after the ECB defused the euro crisis in the summer of 2012, the painful programmes of austerity have largely been completed, although France, Belgium, Austria and Finland are lagging behind the required deficit-to-GDP ratio of 3%.

Reform is typically a painful process in the short term, and is therefore unpopular in politics except during a crisis; despite experiencing structural issues for decades, European politicians and central bankers lacked the mandate to enact serious change, but it was the euro crisis of 2012 which provided this impetus and offered governments a unique opportunity.

As such, in today’s relatively stronger environment, this may explain why the pace of reform has slowed. However, while the speed with which these reforms are taking place has tailed off, we still expect the benefits will continue to come through.

With economic recovery in Europe occurring at a different pace between countries, as our ‘divergence’ investment theme highlights, we expect to see further variation in the progress of reform. We believe political differences are accentuating this, with countries where populism is a strong force under more pressure to enact reform.

So far, adjustments in the peripheral countries appear to be paying off: unemployment is falling (especially youth unemployment), core employment (those who earn more than €500 a month) is now actually higher than it was before the crisis, and unit labour costs have fallen and stabilised. 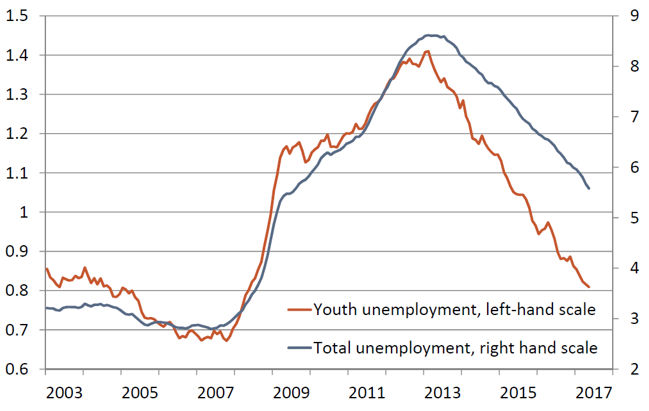 Germany offers a good example of how just small changes at the margins can make a big difference.

Following reunification in 1990, Germany continued to suffer from weak growth and rising unemployment which peaked at 11% following the recession of 2003.

However, in less than a decade, the country transformed itself from the sick man of Europe to economic superstar. The Hartz reforms of 2003-2005, also known as Agenda 2010, were central to this. These reforms led to the decentralisation of the wage-setting process from the industry level (unions) to the firm level, bringing about a rise in employment (chart 4) and ultimately an increase in the competitiveness of Germany’s exports.

Source: Bundesagentur für Arbeit, Bundesbank
Core employment is measured as those who are subject to social security contributions.

There are a few caveats to this. First, the export-led recovery in Germany coincided with an acceleration in growth in China and other emerging markets, creating demand for German products. Further, the most effective reforms usually happen under pressure – in Germany’s case reforms accelerated as a result of the 2003 recession.

We are also starting to see some effects coming through from reform in Italy. Since the euro crisis of 2012, Italian governments have made a series of broad changes including:

In combination with improved global economic growth, we have seen a consequent recovery in employment in Italy (chart 5). 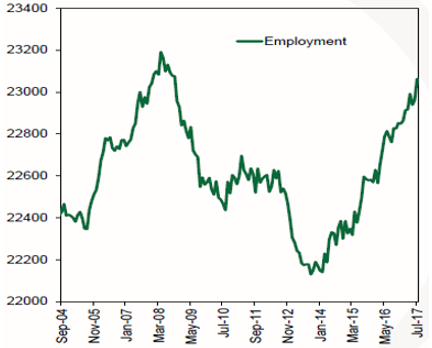 There have also been reforms aplenty in the banking system, in particular focused on non-performing loans and insolvency procedures, leading to the compulsory liquidation of the failed Veneto regional banks and the recapitalisation of Banca Monte dei Paschi di Siena. The government has also introduced the guarantee on securitisation of bank non-performing loans (GACS), used to facilitate the removal of non-performing loans from the books of commercial banks.

The Italian Treasury’s chief economist Riccardo Barbieri Hermitte has estimated that recent financial reforms could increase GDP by 2.9% in 2020 and 4.7% in 2025, and the country has seen a notable improvement in economic sentiment (chart 6). 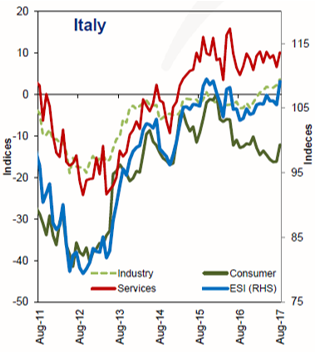 President Macron is in a unique position to enact change, having been elected on a mandate for deep reforms, including:

Meanwhile, he also intends to reduce corporate tax to 25% and start a large infrastructure programme, spending c. 2.2% of GDP.[4]

These grand plans have not been met with enthusiasm by all, with thousands of protestors taking to the streets, and unions organising strikes across France last month. August saw Macron’s approval rating fall further and faster than any other French president in history, plunging from 62% following his election victory in May to around 40%.[5]

There are further warning signs that France’s newly elected golden boy may not deliver all that he promised on the campaign trail. Despite pledging a fresh approach to government, we have seen many of France’s old habits repeated yet again: traditional bureaucrats elected to high-level positions within the organisation, the continuation of protectionist tendencies, and the use of public money in private corporations.

Nevertheless, while we believe the market is overly focused on the limited progress Macron can achieve over the next 12 months, we do think that the president’s agenda shows promise, and see potential for France to surprise investors over a longer time horizon. Pushing through a radical reform agenda is likely to be a slow process, and as such we prefer to take a longer-term perspective.

To conclude, we are broadly optimistic about the prospect for Europe’s reform agenda to influence growth positively. However, this comes with one caveat: for countries such as Italy and France to emulate the success of Germany, healthy growth on a global scale is vital.

[2] Investment in physical assets such as machinery, land or buildings. 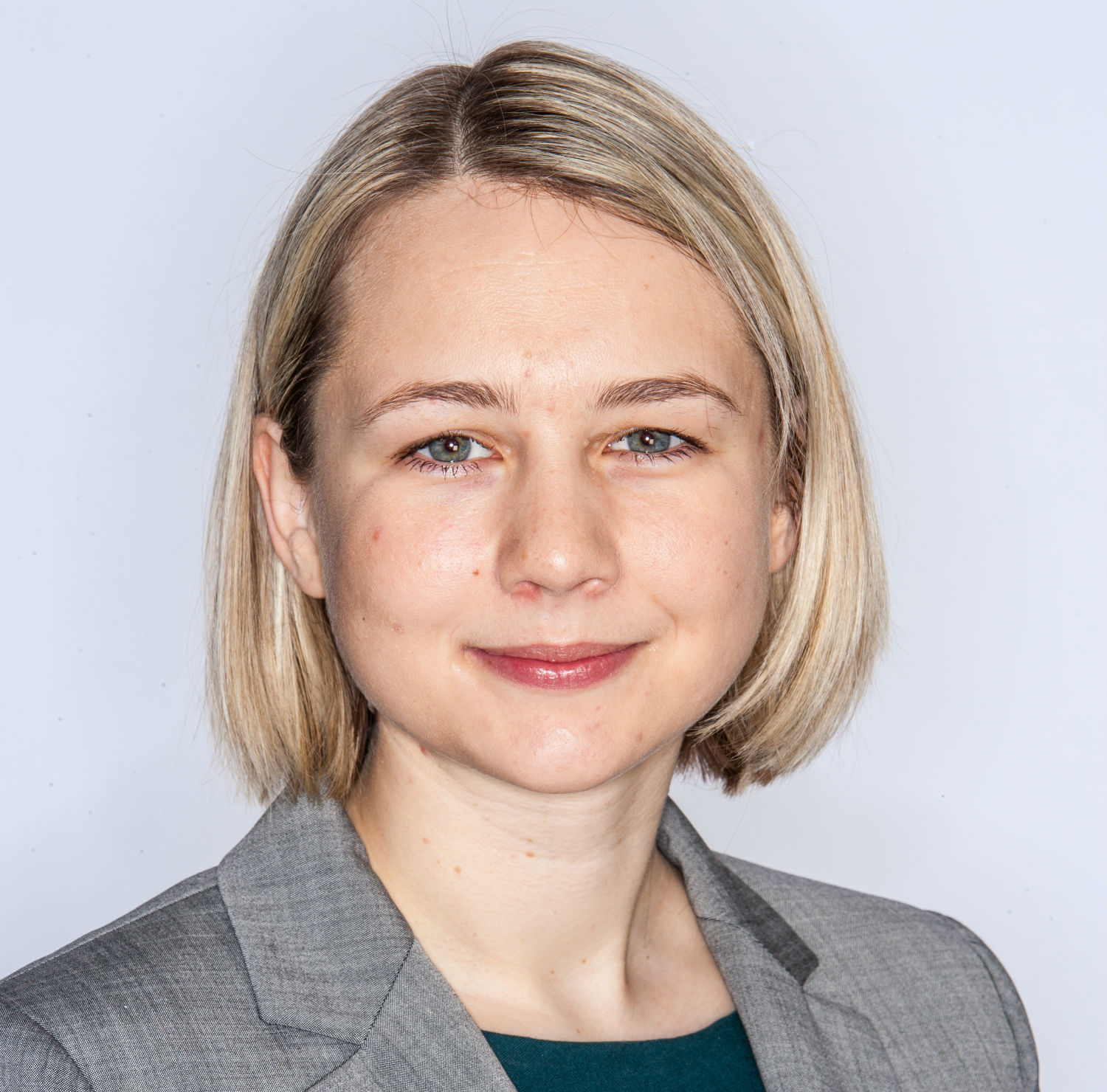 While you were watching Brexit