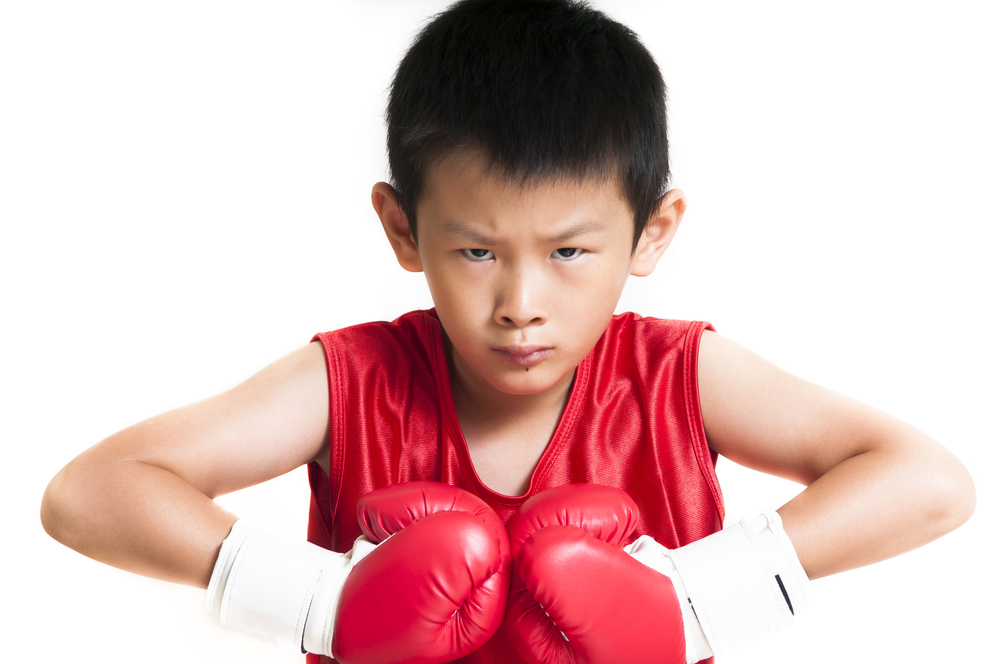 Last week saw two key events in China for investors. The first was the 19th Communist party congress, a week-long political gathering held only twice every decade, and the second was the issuance of US$2bn of debt by the country.

Ostensibly, the new issue, which was unrated and split equally between five-year and ten-year paper, was to provide a reference for China’s quasi-sovereigns looking to return to the US dollar market. However, it also presented the opportunity for a timely show of strength from the government following the 19th Party Congress and S&P’s recent rating downgrade of China’s sovereign debt from A+ to A- – hence the absence of ratings.

Based on initial pricing guidance of 50-60 basis points (bps) over US Treasuries, we thought the five-year issue looked attractive given recent US curve flattening, the strength of the sovereign’s balance sheet, credit default swaps (CDS) at similar (if tight) levels, and relative value versus spreads on other highly rated US dollar sovereign issuance.

However, true to the prevailing ‘buy on sight’ investor mentality we are observing, initial guidance proved to be no guide at all, with five-year and ten-year issuance ultimately coming in at 15bps and 25bps over Treasuries respectively. Further, with around US$22bn of orders received for the bonds, the issue was 11 times oversubscribed![1]

Given the fact that China’s CDS spreads have not traded below 30bps since late 2007 (see below), and that much of this issuance will be held to maturity, thereby impairing liquidity, in our view these bonds ultimately represented poor value, despite China’s attraction as a strong credit issuer and a good source of diversification. 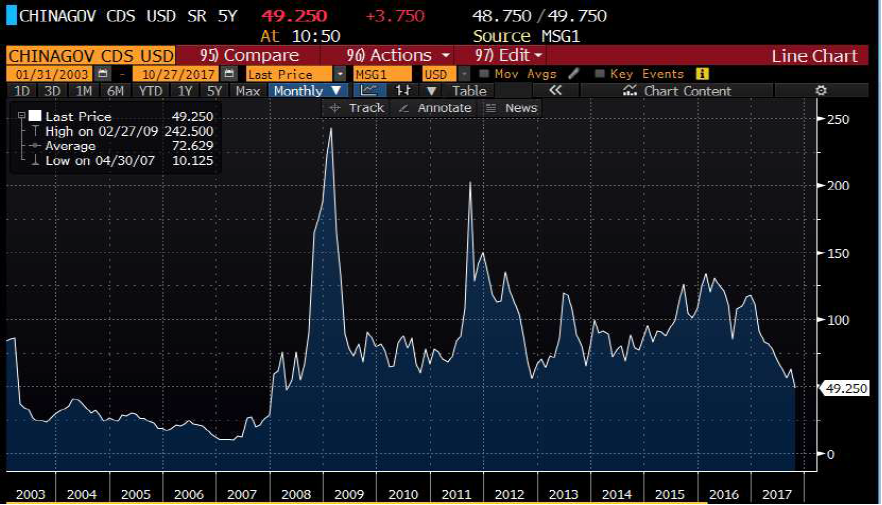 Nonetheless, the issuance marked the end of a successful ten days for China’s Communist Party and Xi Jinping in particular. Indeed, the conclusion of the Party Congress on 25 October saw the Party’s General Secretary achieve practically everything he could have wanted. The enshrining of Xi’s name and philosophy (“Xi Jinping Thought on Socialism with Chinese Characteristics for a New Era”) into the Party Charter elevates China’s leader to a status not witnessed since Mao. While previous leaders such as Hu Jintao and Jiang Zemin have also had their own ideologies incorporated in the constitution, Mao, Deng Xiaoping (posthumously), and now Xi are the only other leaders to have had their names included.

Furthermore, the absence of a nominated successor and the appointment of allies to a majority of Standing Committee and Politburo positions further concentrates political power. This also raises the probability of Xi’s leadership extending beyond 2022, while enhancing the General Secretary’s capacity to pursue his preferred policy agenda in the meantime.

Xi’s political report at the opening of the Party Congress last week was more international relations-focussed than previous such speeches, reflecting an outward looking and increasingly confident China, implying that projects such as the  agenda should gain renewed impetus.

Nevertheless, the tone also reinforces the prospects of future US-China geopolitical tensions. While Trump’s scheduled visit to China next month could see the announcement of greater market access for US companies (albeit very selectively), Xi’s explicit reference to island-building in the South China Sea, effectively normalises, from Beijing’s perspective, a policy deemed illegal and intolerable to a truculent US administration. This geopolitical reality represents a persistent tail risk to investors’ positive risk sentiment, particularly in South East Asia.

In contrast to the declining pace of fixed-asset investment growth, household expenditure has expanded steadily in recent years, representing a significant opportunity for foreign multinationals as the liberalisation of services progresses cautiously. Meanwhile, the General Secretary’s focus on the development of higher value-added manufacturing points to the continued convergence of China’s research and development spending (as a % of GDP) on advanced economy levels (see chart).

However, while Xi’s reference to the quality over quantity of future growth is encouraging (implying a possible de-emphasising of precise output targets), a number of the Party’s goals suggest centralised economic management is likely to remain prominent: first, Beijing’s commitment to building a “moderately prosperous” society with a GDP per capita of US$10,000 by 2020 which necessitates above 6% year-on-year GDP growth until such time; second, Xi’s emphasis on the importance of a strong SOE sector; and, finally, government demands for representation on the boards of major private companies (such as Weibo and Alibaba).

Indeed, reference to capital account liberalisation and convertibility was conspicuous by its absence, in contrast to the rhetoric which accompanied the 18th Party Congress in 2012. Progress on capital account flexibility is therefore likely to remain asymmetrical, with increased foreign participation in onshore markets contrasting with persistent restrictions and scrutiny over China’s overseas direct investments. Imminent confirmation of Zhou Xiachunan’s successor, after 15 years as governor of the People’s bank of China, could provide further indications regarding the prospects for additional capital account opening. Investors’ attention will now turn to the Central Economic Work Conference in November/December for further clarification regarding policy direction and key economic targets for 2018.

In our view, the elevation of Xi’s political power at the Party Congress certainly increases the scope for a more aggressive pursuit of the president’s reform agenda over the coming years. We expect that the extent to which the leadership is willing to trade near-term volatility for long-term productivity gains will become increasingly evident in the months ahead. 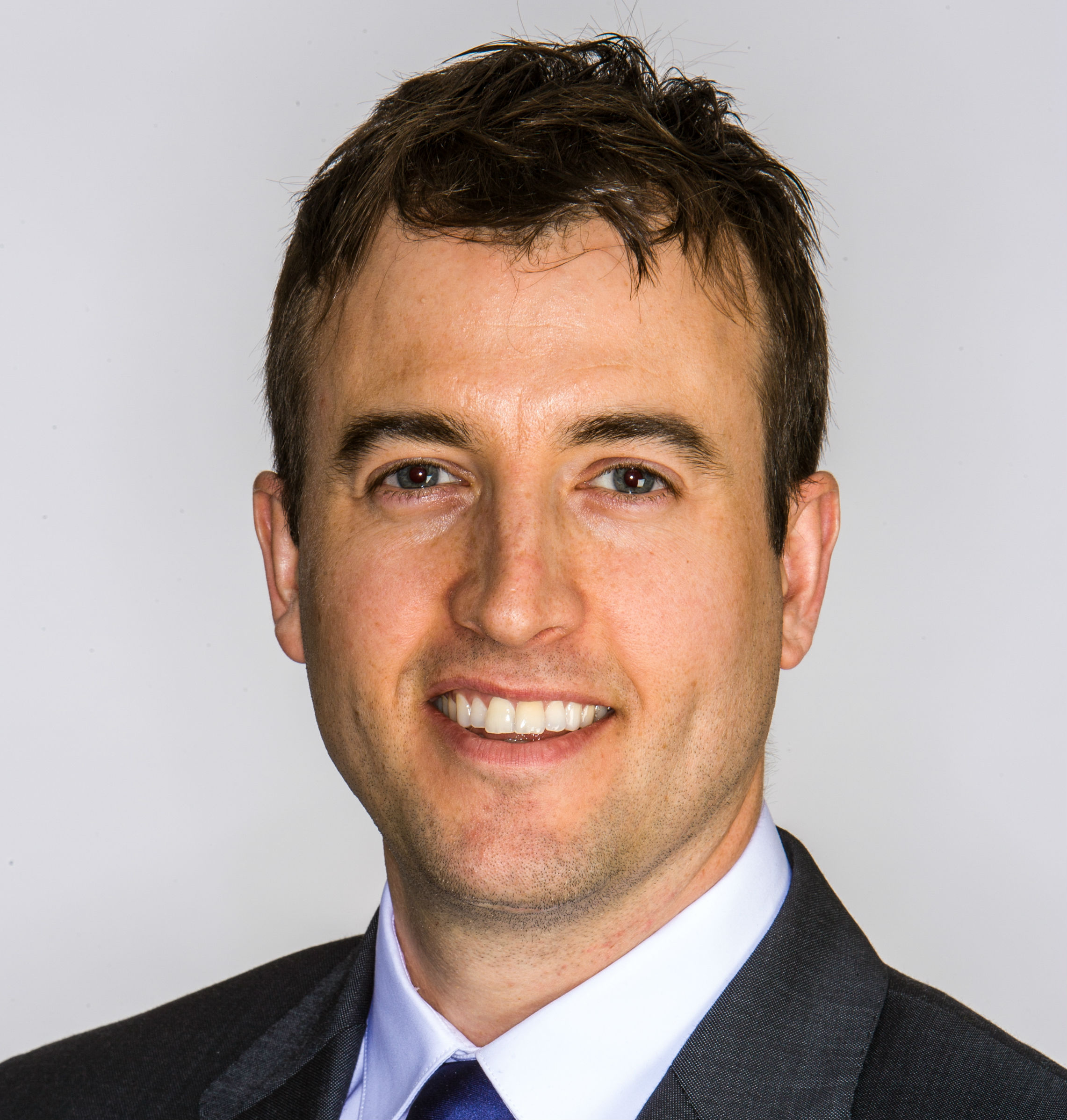